“In Q1 2023, we continued to execute on Cannara’s growth plan, as evidenced by the activation of our 7th grow zone at our Valleyfield Facility, our entry into the BC market and the release of 14 new high-demand SKU’s,” stated Zohar Krivorot, President & Chief Executive Officer of Cannara. “We have maintained our market share in Quebec, which we expect to increase in future quarters as we continue to expand in Ontario, British Colombia, and Saskatchewan in addition to launching in Alberta. The release of 14 new SKU’s this quarter is a testament to the hard work of all Cannara staff here and we are confident that our premium products will continue to be a hit with our ever-expanding customer base,” concluded Mr. Krivorot.

Nicholas Sosiak, Chief Financial Officer of Cannara added, “When compared to the previous year’s Q1 results, the financials improved significantly across all metrics.  However, we did experience some temporary pre-roll manufacturing capacity challenges that impacted sales during the quarter. We are working diligently on increasing internal pre-roll manufacturing capacity, and we expect to resume our significant growth trend during Q2. We expect to achieve 9 active growing zones at Valleyfield this year, having just activated our 7th, allowing us to greater volumes of premium-grade cannabis. As the Company continues to scale, we expect revenues, margins, and profits to continue to improve, and shareholders to be rewarded for their investment in Cannara. I am proud to be able to report our seventh consecutive quarter of Adjusted EBITDA in addition to currently being on track to achieving record monthly sales in January 2023,” concluded Mr. Sosiak.

As at the date of this report, the Company had 877,481,321 common shares and 44,471,911 stock options issued and outstanding. For further information, the complete Consolidated Financial Statements and Management’s Discussion and Analysis, along with additional information about the Company and all of its public filings that are available at sedar.com and the Company’s investor website, investors.cannara.ca. 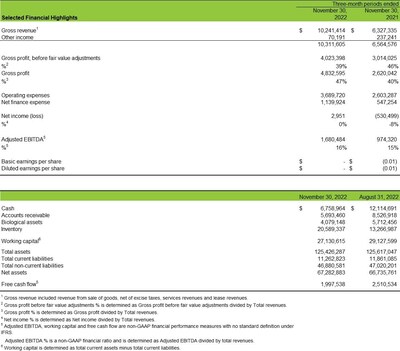