VANCOUVER, BC / ACCESSWIRE / January 18, 2023 / Gold Terra Resource Corp. (TSXV:YGT)(Frankfurt:TX0)(OTCQX:YGTFF) (“Gold Terra” or the “Company”) is pleased to announce the start of an 8,000-metre winter drilling program on the Con Mine Option (“CMO”) Property in Yellowknife, NWT. The CMO property is under option from subsidiaries of Newmont Corporation and is acquirable by the Company upon fulfillment of certain conditions set out in the CMO agreement, as reported in the Company’s news release dated November 22, 2021.

The initial drilling program will consist of 20 holes drilled from surface to a depth of -600 metres over a 2-kilometre stretch with the objective of expanding the September 2022 initial Mineral Resource Estimate (“MRE”) (see September 7, 2022 press release) along the Campbell Shear south of the Con Mine. In addition, preparations are underway to move in a second drill which is capable of drilling 2,500 metre holes to test the depth extension of mineralization below the former Con Mine.

Chairman and CEO, Gerald Panneton, commented, “This winter drilling program will continue to focus on expanding the current near surface mineral resources on the CMO on where the initial MRE was based on. At the same time, we are planning, to drill the down plunge extension of the Con Mine deposit below -1,900 metres as we strongly believe there is significant additional high-grade potential. The current MRE remains open in all directions along the prolific 6-kilometre-long Campbell Shear structure from which the Con Mine produced more than 5 million ounces of high-grade gold (16 g/t Au) on 2 kilometres of strike length alone. Our goal is to advance the project towards an economic study and bring further value to our shareholders.”

The focus of the winter drilling program is to expand the current mineral resource estimate with targets being shown in Figure 1 below.

All these targets are located along the Campbell Shear structure between surface and -500 meters depth with the exception of one hole which will test the depth of the Yellorex Main deposit where most of the initial MRE is located.

The drilling program will start on the Yellorex North target this week, with the first seven (7) holes drilled near surface representing the best underexplored target of the area. The target area is very close to existing underground mining infrastructure and tested only by one hole in 2022 (GTCM22-039). 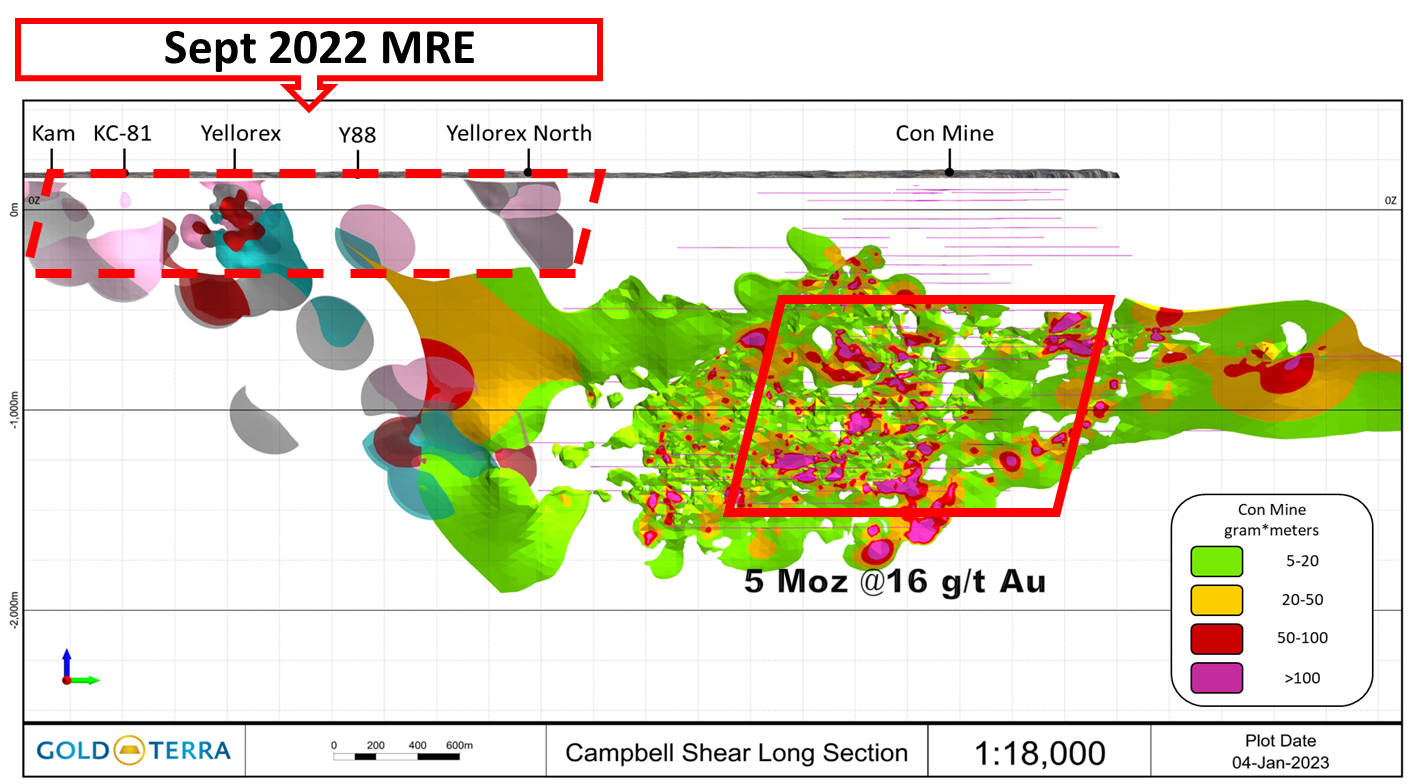 Deep Drilling Program below the Con Mine

The objective is to drill two holes targeting high-grade gold shoots beneath the Con Mine workings as shown in Figure 2: Joe Campbell, P. Geo., Senior Geological Advisorfor Gold Terra is a Qualified Person within the meaning of NI 43-101 and has reviewed and approved the technical information contained in this news release.

The YCG project encompasses 800 sq. km of contiguous land immediately north, south and east of the City of Yellowknife in the Northwest Territories. Through a series of acquisitions, Gold Terra controls one of the six major high-grade gold camps in Canada. Being within 10 kilometers of the City of Yellowknife, the YCG is close to vital infrastructure, including all-season roads, air transportation, service providers, hydro-electric power, and skilled tradespeople. Gold Terra is currently focusing its drilling on the prolific Campbell Shear, where 14 Moz of gold has been produced, and most recently on the Con Mine Option claims immediately south of the past producing Con Mine (1938-2003).

The YCG and CMO property lie on the prolific Yellowknife greenstone belt, covering nearly 70 kilometers of strike length along the main mineralized shear system that host the former-producing high-grade Con and Giant gold mines. The Company’s exploration programs have successfully identified significant zones of gold mineralization and multiple targets that remain to be tested which reinforces the Company’s objective of re-establishing Yellowknife as one of the premier gold mining districts in Canada.

Cautionary Note to United States Investors
The Company prepares its disclosure in accordance with the requirements of securities laws in effect in Canada, which differ from the requirements of U.S. securities laws. Terms relating to Mineral Resources in this news release are defined in accordance with NI 43-101 under the guidelines set out in CIM Definition Standards on Mineral Resources and Mineral Reserves, adopted by the Canadian Institute of Mining, Metallurgy and Petroleum Council on May 19, 2014, as amended (“CIM Standards”). The U.S. Securities and Exchange Commission (the “SEC”) has adopted amendments effective February 25, 2019 (the “SEC Modernization Rules”) to its disclosure rules to modernize the mineral property disclosure requirements for issuers whose securities are registered with the SEC under the U.S. Securities Exchange Act of 1934. As a result of the adoption of the SEC Modernization Rules, the SEC will now recognize estimates of “Measured Mineral Resources”, “Indicated Mineral Resources” and “Inferred Mineral Resources”, which are defined in substantially similar terms to the corresponding CIM Standards. In addition, the SEC has amended its definitions of “Proven Mineral Reserves” and “Probable Mineral Reserves” to be substantially similar to the corresponding CIM Standards.

There can be no assurance that such statements will prove to be accurate, as the Company’s actual results and future events could differ materially from those anticipated in this forward-looking information as a result of the factors discussed in the “Risk Factors” section in the Company’s most recent MD&A and annual information form available under the Company’s profile at www.sedar.com.