Exploration Manager Cal Herron, P.Geo., stated: “Lewis is a large, highly prospective land package located in the heart of Nevada’s “elephant” country, hosting unusually strong, widespread gold mineralization in Upper Plate siliceous rocks. Drilling in 2021 at the Celestine O’Neal target within the Lewis Project revealed the presence of a strong epithermal gold system with notable intercepts including 83.9m grading 1.04 g/t Au and 54.9m grading 1.3 g/t Au. Given the strong, widespread gold mineralization in Upper Plate rocks, good potential exists for much stronger gold mineralization in carbonate rocks beneath the Roberts Mountain Thrust. Many past gold explorers in Nevada have recognized this potential at Lewis, but did not know where or how deep to look, and consequently very few historical holes were drilled to depth. Receipt earlier this year of a re-interpretation of detailed ground gravity data collected in 2021 offers insights into the deep potential at Lewis for Lower Plate hosted gold targets. The 2022 drilling will help to define structural controls related to the shallow gold mineralization that may vector us downward into Lower Plate-hosted mineralization. Gold in the Lower Plate is the real prize at Lewis, so we should have a much better understanding of the district’s shallow and deep potential upon conclusion of this drill program.” 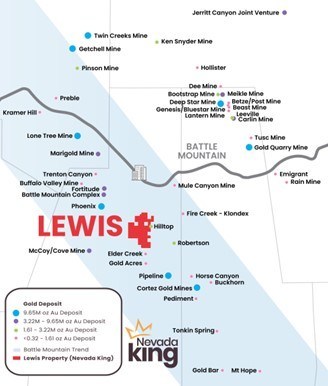 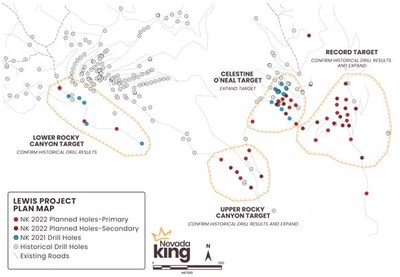 Nevada King initiated its maiden drill program at Lewis in October 2021 and drilled a total of 1,150m in 18 RC holes (Figure 2). The program objective focused on: (1) substantiating historical drill results within the Celestine O’Neal and Rocky Canyon targets, and (2) testing for lateral extensions of gold mineralization with step-out drilling from mineralized historical holes. The drilling at the Celestine O’Neal target revealed the presence of a strong epithermal gold system, as evidenced by Nevada King’s drill results and historical drill records together with the observed strong micro-veining and well-banded quartz-carbonate-sulfide veins. The geochemistry and style of sulfide mineralization appear similar to the gold mineralization reported at Nevada Gold Mines’ Robertson deposit, which is currently in the resource development stage about 7km north of their large Pipeline mine and 22km southeast of the Lewis Project.

“The fact that this mineralization is buried beneath a geochemically “dead” limestone unit changes the game at Lewis. Historical drilling generally concentrated on areas with strong, surficial rock and soil anomalies while areas lacking gold anomalies were avoided. This blanket of landslide or detachment debris effectively hides the underlying gold mineralization and opens up a large area for Nevada King to explore that was ignored by previous operators. The 1.5mgrading 15.73 g/t in LS21-008 is particularly intriguing due to the high-grade gold mineralization encountered, and because this hole stepped out 120m from the southern-most historical hole at Celestine O’Neal and tested a part of the property that had not previously been drilled. This interval defines an interpreted southwest mineralized trend extending from Celestine O’Neal through hole LS21-008 projecting into an area covered by overburden that also has never been drilled,” stated Cal Herron.

Drilling at Rocky Canyon in 2021 encountered intensely fractured rock that created challenging drilling conditions, and consequently the Company was not able to adequately test its intended targets. The Rocky Canyon target is bounded on two sides by areas hosting extensive historical drilling with significant gold mineralization and thus remains a high priority target that the Company will be testing in its 2022 program.

See April 28, 2022 release for full table of 2021 drill intercepts and the summary of geology as seen in outcrop and RC cuttings in the Celestine O’Neal target area. True vertical thickness of mineralization reported above is approximately 80% to 90% of hole intercept length.

Nevada King originally acquired a large land position at Lewis to expand the shallow historical gold resources hosted in Upper Plate lithologies at Celestine O’Neal, Record, and Rocky Canyon. However, the possibility of finding deeper mineralization hosted in Lower Plate carbonates beneath the Roberts Mountain Thrust is very prospective considering how strong and widespread the gold mineralization is in the Upper Plate rocks. The existence of monster gold deposits at Pipeline and Cortez only 23km away provides further conviction for looking deep at Lewis. Unfortunately, only six historical holes within the property exceeded 1000′ (305m) depth, ranging from 1050 feet (320m) to 2000 feet (610m). Only 4% of all the historical holes at Lewis exceeded 700′ (213m) depth so there is very little drill data available for guiding a deep drilling program. Nevada King, therefore, initiated a detailed ground gravity survey across most of the project area in early 2021. Survey results revealed a larger, circular gravity low centred in the middle of the project area, with most of the historical resource zones and strong soil/rock anomalies concentrated around the outer margin of the lower density zone. In order to better define the gravity anomaly, the Company commissioned air magnetic and IP surveys in mid-2022. Both surveys are currently in progress and, upon completion, the magnetic and IP data will be integrated with the gravity interpretation in order to better guide the drilling program, particularly in covered areas.

The scientific and technical information in this news release has been reviewed and approved by Calvin R. Herron, P.Geo., who is a Qualified Person as defined by National Instrument 43-101 (“NI 43-101“).

Nevada King is the third largest mineral claim holder in the State of Nevada, behind Nevada Gold Mines(Barrick/Newmont) and Kinross Gold. Starting in 2016 the Company has staked large project areas hosting significant historical exploration work along the Battle Mountain trend located close to current or former producing gold mines. These project areas were initially targeted based on their potential for hosting multi-million-ounce gold deposits and were subsequently staked following a detailed geological evaluation. District-scale projects in Nevada King’s portfolio include (1) the 100% owned Atlanta Mine, located 100km southeast of Ely, (2) the Lewis and Horse Mountain-Mill Creek projects, both located between Nevada Gold Mines’ large Phoenix and Pipeline mines, and (3) the Iron Point project, located 35km east of Winnemucca, Nevada.

The Company is well funded with cash of approximately $21-million as of August 2022.

The Atlanta Mine is a historical gold-silver producer with a NI 43-101 compliant pit-constrained resource of 460,000 oz Au in the measured and indicated category (11.0M tonnes at 1.3 g/t) plus an inferred resource of 142,000 oz Au (5.3Mtonnes at 0.83 g/t). See the NI 43-101 Technical Report on Resources titled “Atlanta Property, Lincoln County, NV” with an effective date of October 6, 2020, and a report date of December 22, 2020, as prepared by Gustavson Associates and filed under the Company’s profile on SEDAR (www.sedar.com).