VANCOUVER, BC, Dec. 5, 2022 /CNW/ – Nevada King Gold Corp. (TSXV: NKG) (OTCQX: NKGFF) (“Nevada King” or the “Company“) is pleased to announce assay results from three core holes and one reverse circulation (“RC“) hole recently completed at its Atlanta Gold Mine Project located 264km northeast of Las Vegas, Nevada in the prolific Battle Mountain Trend. This drilling was designed to test the gap between the historical 2020 Gustavson resource zone and gold mineralization drill-defined by the Company’s 2021 program south of the Atlanta pit.

“We are very pleased that our recent drilling has defined what we now interpret as the primary conduit for gold mineralization at Atlanta. As shown on section F-F’, the three new holes fully bridge across the AMFZ and demonstrate excellent lateral continuity of gold mineralization across this structure and importantly as noted they define what we have named the Atlanta King Fault (“AKF“), a major fault displacing basement stratigraphy along the axis of the AMFZ that clearly pre-dates caldera formation in the Oligocene (approx. 32Ma). The gold mineralization at Atlanta has been dated at 29Ma and is directly related to evolution of the host caldera, so the AKF was obviously reactivated during onset of caldera formation and served as a major conduit for explosive intrusive activity and related hydrothermal fluids that ultimately deposited the gold at Atlanta. As such, it is also the most likely host for high-grade mineralization.

“From a global perspective, hydrothermal systems localized along reactivated basement structures tend to be associated with significant deposits, so we look forward to drill results coming in as we systematically fence-drill the length of the AMFZ. We know from recently drilled holes north and northwest of Section F-F’ that the AKF follows the AMFZ, so our holes planned for the next two months will concentrate along this major structure in order to extend the high-grade mineralization northward toward the North Extension Target (“NET“) area as indicated by the red arrow in Figure 1.” 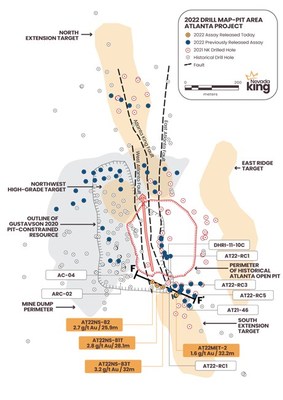 Figure 1. Location map for holes reported in this news release along section F-F’ relative to the perimeter of the historical Atlanta Pit and 2020 Gustavson pit shell. 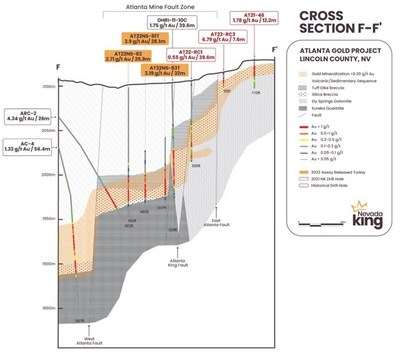 The scientific and technical information in this news release has been reviewed and approved by Calvin R. Herron, P.Geo., who is a Qualified Person as defined by National Instrument 43-101 (“NI 43-101“).

Nevada King is the third largest mineral claim holder in the State of Nevada, behind Nevada Gold Mines(Barrick/Newmont) and Kinross Gold. Starting in 2016 Company has staked large project areas hosting significant historical exploration work along the Battle Mountain trend located close to current or former producing gold mines. These project areas were initially targeted based on their potential for hosting multi-million-ounce gold deposits and were subsequently staked following a detailed geological evaluation. District-scale projects in Nevada King’sportfolio include (1) the 100% owned Atlanta Mine, located 100km southeast of Ely, (2) the Lewis and Horse Mountain-Mill Creek projects, both located between Nevada Gold Mines’ large Phoenix and Pipeline mines, and (3) the Iron Point project, located 35km east of Winnemucca, Nevada.

The Company is well funded with cash of approximately $12 million as of December 2022.

The Atlanta Mine is a historical gold-silver producer with a NI 43-101 compliant pit-constrained resource of 460,000 oz Au in the measured and indicated category (11.0M tonnes at 1.3 g/t) plus an inferred resource of 142,000 oz Au (5.3M tonnes at 0.83 g/t). See the NI 43-101 Technical Report on Resources titled “Atlanta Property, Lincoln County, NV” with an effective date of October 6, 2020, and a report date of December 22, 2020, as prepared by Gustavson Associates and filed under the Company’s profile on SEDAR (www.sedar.com).

NI 43-101 Mineral Resources at the Atlanta Mine