SASKATOON, SK, Jan. 11, 2023 /CNW/ – Royal Helium Ltd. (TSXV: RHC) (TSXV: RHC.WT) (OTCQB: RHCCF) (“Royal” or the “Company“) is pleased to announce that it has signed a tolling services agreement with Tumbleweed Midstream LLC, of Colorado(“Tumbleweed“) under which Tumbleweed will process Royal’s 99.999% gaseous helium at its Ladder Creek Liquefaction Facility (“Ladder Creek“) into liquid helium. The refined helium gas will be delivered from Royal’s helium wells and helium processing plant currently under construction at Steveville, Alberta to Tumbleweed’s facility in Colorado. Ladder Creek has warranted that the liquid helium delivered will meet or exceed a purity level of 99.999% in compliance with Compressed Gas Association G-9.1-2014 Commodity Specification for Helium. 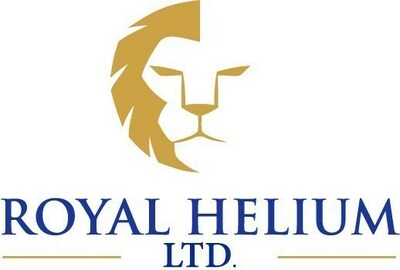 Mr. Andrew Davidson, President, and CEO of Royal states, “We are pleased to be working with Ladder Creek as our tolling services provider for the liquefaction of Royal’s refined gaseous helium. Liquefaction is a crucial step in both Royal’s production process and our off-take partner’s purchase process, as gaseous helium cannot be stored or transported over long distances. Ladder Creek’s location and processing capabilities and specifications align perfectly with our off-take partner’s delivery requirements.”

The primary term of this agreement is for 3 years, through to December 31, 2025, and is renewable on a year-to-year basis thereafter. Ladder Creek will process up to 24 million cubic feet of crude helium per year for Royal with provisions for some excess if capacity allows.

Royal controls over 1,000,000 acres of prospective helium land across southern Saskatchewan and southeastern Alberta. All of Royal’s lands are in close vicinity to highways, roads, cities and importantly, close to existing oil and gas infrastructure, with a significant portion of its land in close proximity to existing helium producing locations. With stable, rising prices and limited, non-renewable sources for helium worldwide, Royal intends to become a leading North American producer of this high value commodity. Royal’s helium reservoirs are carried primarily with nitrogen. Nitrogen is not considered a greenhouse gas (“GHG“) and therefore has a low GHG footprint when compared to other jurisdictions that rely on large scale natural gas production for helium extraction. Helium extracted from wells in Saskatchewan and Alberta can be up to 99% less carbon intensive than helium extraction processes in other jurisdictions.

This news release includes certain statements that may be deemed to be “forward-looking statements”. All statements in this news release, other than statements of historical facts, that address events or developments that management of the Company expects, are forward-looking statements, including anticipated deliveries under Royal’s offtake agreement, the intended construction of a helium processing plant in Steveville, Alberta and the processing capabilities of Ladder Creek. In addition, all references to resources are deemed to be forward-looking statements as they involve the implied assessment, based on certain estimates and assumptions, that the resources described exist in the quantities predicted or estimated and can be profitably produced in the future. These forward-looking statements are subject to numerous risks and uncertainties, certain of which are beyond the Company’s control, including without limitation, risks associated with oil and gas exploration, development, exploitation, production, marketing and transportation, loss of markets, volatility of commodity prices, volatility in production rates, environmental risks, inability to obtain drilling rigs or other services, capital expenditure costs, including drilling, completion and facility costs, unexpected decline rates in wells, wells not performing as expected, delays resulting from or inability to obtain required third party and regulatory approvals, ability to access sufficient capital from internal and external sources, inability to access gas transportation and processing infrastructure, the impact of general economic conditions in Canada, the United Statesand overseas, industry conditions, changes in laws and regulations (including the adoption of new environmental laws and regulations) and changes in how they are interpreted and enforced, increased competition, the lack of availability of qualified personnel or management, fluctuations in foreign exchange or interest rates, and the uncertainty of estimates and projections of production, costs and expenses. Although management believes the expectations expressed in such forward-looking statements are based on reasonable assumptions, such statements are not guarantees of future performance, and actual results or developments may differ materially from those in the forward-looking statements. The Company undertakes no obligation to update these forward-looking statements if management’s beliefs, estimates or opinions, or other factors, should change. Please see the public filings of the Company at www.sedar.comfor further information and risks applicable to the Company.