TORONTO, Nov. 09, 2022 (GLOBE NEWSWIRE) — Arena Minerals Inc. (“Arena” or the “Company”) (TSX-V: AN | OTCQX: AMRZF) is pleased to announce it has completed exploratory drill hole R-03 on the Barreal II claim block, which forms part of the northernmost portion of the Sal de la Puna Project (“SDLP Project”) located in the Pastos Grandes basin within Salta province, Argentina. The rotary exploratory hole intersected two brine aquifers and was drilled down to a total depth of 620 metres below surface. The two brine aquifers consist of:

Both discovered brine aquifers are predominantly composed of alluvial sands with minor halite. The lower aquifer commenced at a depth of 360 metres and intersected brines assaying up to 695 mg/l Li, representing the highest grade reported intercept in the Pastos Grandes basin. The aquifer remains open at depth as the drill hole was stopped at 620 metres in alluvial sands due to drill capabilities.

William Randall, President & CEO of Arena, stated, “Our second exploration hole delivers our best drill results to date, opening the northern portion of our claim blocks to resource development. The grades, brine quality and aquifer material warrant further drilling to expand this brine resource to the north onto our larger La Relojera and Barreal III claims.”

A map showing exact locations of drilling completed by Arena to date can be found below. 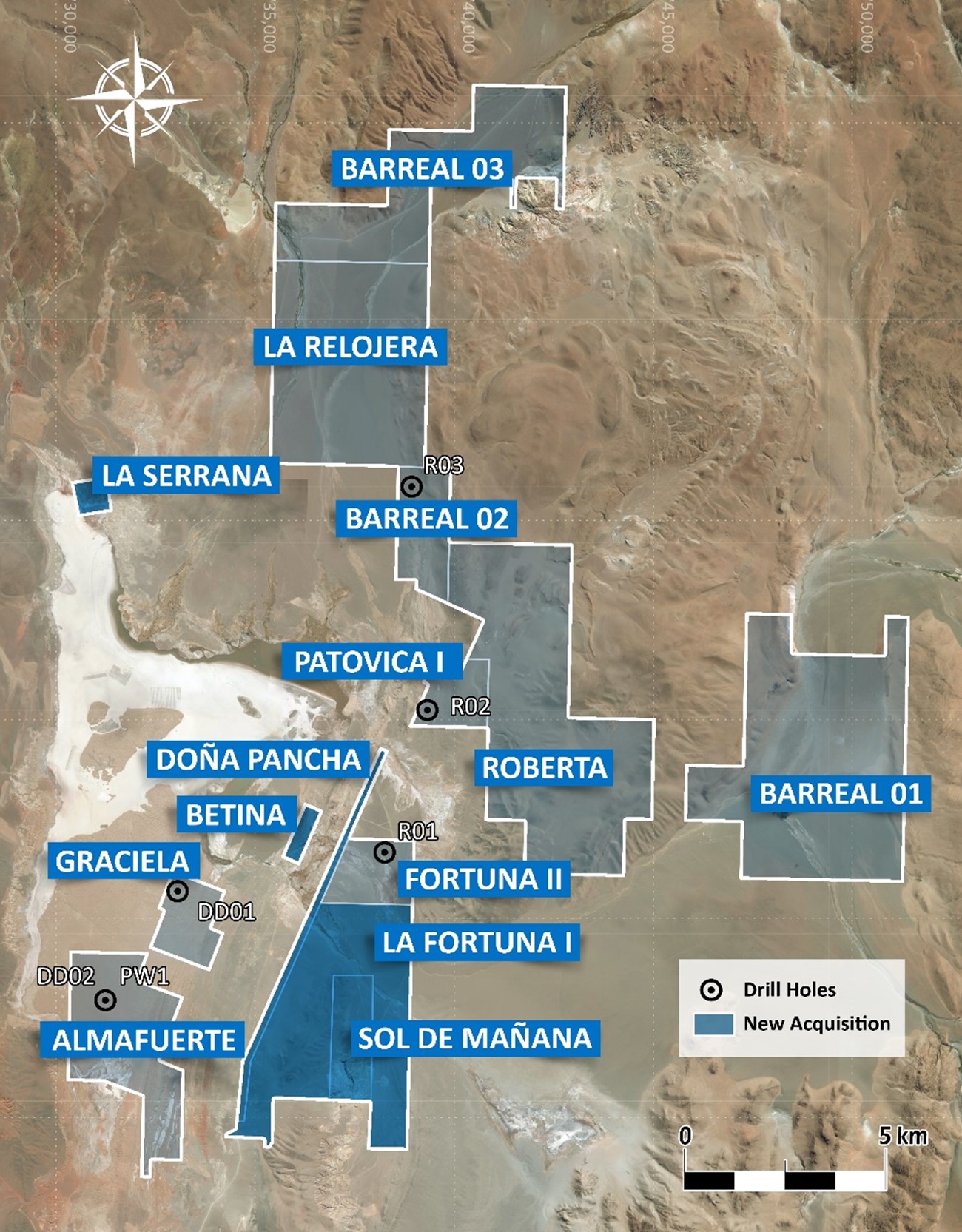 R-03 was completed as an observation well. Depth-specific brine sampling was carried out in R-03 over the entire brine column using double packer sampling systems. The entire hole intersected brines indicating fresh water is not predominant in this northern portion of the basin.

The production well (PW-1) has been completed on the main Almafuerte claim block. PW-1 has been completed in the lower gravel brine aquifer with screened stainless casing and gravel pack from 350 to 500 metres depth and blank casing and cement seal from 350 m to surface. This lower gravel aquifer was initially intersected in diamond drill hole DD-02 and averaged 503 milligrams per litre (“mg/l”) lithium (“Li”) with grades as high as 557 mg/l Li (for further details refer to press release dated April 11, 2022). The 30-day pumping test in PW-1 is scheduled to commence the week of November 14th, 2022. Water level responses will be monitored during the pumping test in adjacent observation wells DD-02 which is also screened in the lower gravel unit and M-1 which is screened in the upper halite clay unit to 50 m depth.

R-02 has been drilled to a total depth of 411 metres at Patovica I, having intersected basement lithologies at 341 metres downhole. The drill hole intersected a mix of clay and sand horizons. Depth-specific brine samples have been collected and sent to the laboratory of analysis. Results are pending.

The drill program initially focused on the Almafuerte and Graciela blocks which border Lithium America’s Pastos Grandes project to the south and south-east and consists of 3,000 metres, with the objective of both increasing the category of the current resource and increasing the SDLP Project’s resource base. Exploration holes are designed to test previously undrilled portions of the Pastos Grandes basin for the purpose of expanding the resource beyond the known aquifers in the Almafuerte and Graciela claims blocks.

The drill program is jointly designed and supervised by the Company and Atacama Water consultants. All brine samples are sent to SGS Laboratories, Salta, Argentina, an independent and fully international accredited laboratory for analysis for lithium multi-element Induction Coupled Plasma Spectroscopy. Arena has a regimented Quality Assurance, Quality Control program where at least 10% duplicates, blanks and standards are inserted into each sample shipment.

Arena also owns 80 percent of the Atacama Copper property within the Antofagasta region of Chile, and 5.8 million shares of Astra Exploration. The projects are at low altitudes, within producing mining camps in infrastructure-rich areas, located in the heart of Chile’s premier copper mining district.

For more information regarding the Company, its management, expertise, and projects, please visit www.arenaminerals.com. An email registration allowing subscribers to directly receive news and updates is also available on the website.

The technical information contained in this news release has been reviewed and approved by William Randall, P.Geo, who is a Qualified Person as defined under NI 43-101. Mr. Randall is a director and is the Chief Executive Officer and President of Arena.

On behalf of the Board of Directors of: Arena Minerals Inc.

A photo accompanying this announcement is available at https://www.globenewswire.com/NewsRoom/AttachmentNg/65b3dc7a-c8ff-4338-af7a-65d2544c823b