Toronto, Ontario–(Newsfile Corp. – August 26, 2022) – Cerrado Gold Inc. (TSXV: CERT) (OTCQX: CRDOF) (“Cerrado” or the “Company”) is pleased to announce its operational and financial results for the second quarter of 2022 (“Q2 2022”). Q2 2022 represents the third quarter of mine operations post completion of operational restructuring at its Minera Don Nicolas (“MDN”) Mine in Argentina. The Company’s financial results are reported and available on SEDAR as well as on the Company’s website (www.cerradogold.com).

Q2 2022 Financial and Operational Highlights (All numbers reported in US$)

Mark Brennan, CEO and Co-Chairman, stated: “Despite some challenges associated with the new pits being mined and the consequences of a difficult inflationary environment in Argentina, we are pleased that production rates are consistently within our range of guidance for 2022. As we look to the remainder of the year, we expect to see grades gradually improving as we fully incorporate new mining pits into the production plan. In Brazil work continues to upgrade the resources at Monte Do Carmo and feasibility works are progressing as planned.” 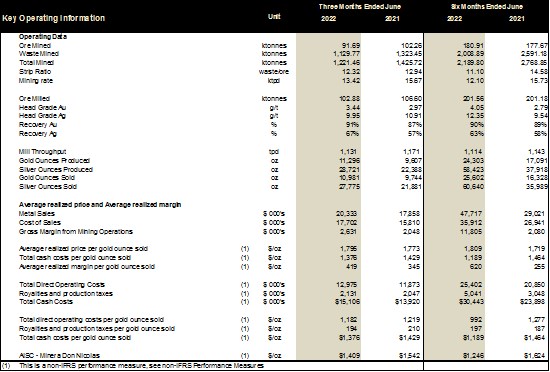 In Brazil, the Company continues to focus on numerous fronts to support the completion of the Feasibility Study (“FS”) for the Serra Alta Deposit. Infill drilling continued in the quarter and completed to August 10th includes 19,600 metres of infill drilling, 8,500 metres of exploratory drilling, and 3,480 metres of sterilization drilling with the use of 7 drill rigs. To date assay results of 77 full infill drill holes at Serra Alta have been received, and results continue to support an upgrade in the Resource categorization from Inferred to the Measured and Indicated categories. In addition, four exploratory drill holes to the east of the East Zone of Serra Alta have been completed demonstrating some eastern extension of the resource at Serra Alta. An additional 2,600m of drilling were included in the infill program to target potential areas to expand the Resources in Serra Alta. The updated Resource Estimate is expected later this year with the FS targeted for completion by the end of Q1/2023.

Cash operating costs per ounce sold was $1,376 per ounce in the three months ended June 30, 2022, which represents a 31% increase on the $1,049 per ounce achieved in Q1 2022. The primary drivers of the increase in costs were a higher strip ratio, reduction in head grade, increase in labour rates in Argentina and an increase in fuel costs as government subsidies were reduced over the period. However, despite these challenges, with the achieved operational improvements and increasing production rates over the last twelve months cash operating costs declined by 4% compared to the second quarter of 2021. The strip ratio of 12.32:1 for the three months ended June 30, 2022, was higher than the 9.85:1 achieved in the first quarter of 2022. The increase is primarily related to the opening of the new pits and was 4% lower as compared to the three months ended June 30, 2021.

Capital expenditure for the quarter was $2.1m and $4.0m for the six months ended June 30, 2022. This was primarily related to engineering activities at the Calandrias heap leach project in Argentina.

The scientific and technical information in this press release has been reviewed and approved by Sergio Gelcich, P.Geo., Vice President, Exploration for Cerrado Gold Inc., who is a Qualified Person as defined in National Instrument 43-101.

Cerrado is a Toronto based gold production, development and exploration company focused on gold projects in the Americas. The Company is the 100% owner of both the producing Minera Don Nicolás mine in Santa Cruz province, Argentina and the highly prospective development project, Monte Do Carmo located in Tocantins State, Brazil.

At Monte Do Carmo, Cerrado is rapidly advancing the Serra Alta deposit through Feasibility and production. The Serra Alta deposit Indicated Resources of 541 kozs of contained gold and Inferred Resources of 780 kozs of contained gold. The Preliminary Economic Assessment demonstrates robust economics as well as the potential to be one of the industry’s lowest cost producers. Cerrado also holds an extensive and highly prospective 82,542 ha land package at Monte Do Carmo.

For more information about Cerrado please visit our website at: www.cerradogold.com.

This press release contains statements that constitute “forward-looking information” (collectively, “forward-looking statements”) within the meaning of the applicable Canadian securities legislation, all statements, other than statements of historical fact, are forward-looking statements and are based on expectations, estimates and projections as at the date of this news release. Any statement that discusses predictions, expectations, beliefs, plans, projections, objectives, assumptions, future events or performance (often but not always using phrases such as “expects”, or “does not expect”, “is expected”, “anticipates” or “does not anticipate”, “plans”, “budget”, “scheduled”, “forecasts”, “estimates”, “believes” or “intends” or variations of such words and phrases or stating that certain actions, events or results “may” or “could”, “would”, “might” or “will” be taken to occur or be achieved) are not statements of historical fact and may be forward-looking statements.