VANCOUVER, BC / ACCESSWIRE / October 19, 2022 / Surge Battery Metals Inc. (the “Company” or “Surge”) (TSXV:NILI)(OTC PINK:NILIF)(FRA:DJ5C) is pleased to report that the first hole of an eight-hole reverse circulation drill program has confirmed the potential for a high-grade lithium deposit existing at the Nevada North Lithium Project located north of Wells, Nevada.

Six representative and randomly selected samples of silty clay, taken from varying depths (see table below) in drill hole NN22-01, range from a low of 1,790 ppm to high of 4,500 ppm lithium (average 3,093 ppm lithium). Full drill results will be announced once received from the lab, expected in two to three weeks.

The maiden drilling program was implemented to test an area of about 1,700 meters east-west occurring in two bands, each about 300 to 400 meters wide that outlined a highly anomalous zone containing abundant sample points greater than 1,000 ppm lithium.

Our maiden drilling program has identified significant potential for a lithium deposit in an area of northern Nevada not previously recognized for its lithium potential. We look forward to seeing the completed assay results from the eight-hole program as they are received over the next few weeks. The Company plans to continue work at this exciting new discovery in the months ahead and we are well financed to do so.”

Drilling utilized a buggy mounted system provided by O’Keefe Drilling Company of Butte, Montana. Site preparation and water handling were provided by Legarza Exploration of Elko, Nevada. Drill cuttings were collected on 5-foot intervals and bagged at the drill site by O’Keefe staff. Samples were collected from the site by the Surge Project geologist and delivered to the ALS Global sample preparation facility in Twin Falls, Idaho. Samples were dried, crushed, and pulverized at the Twin falls facility and sent to other ALS laboratories for analysis. Samples were assayed using the ALS ICP-41 method using an aqua regia leach followed by ICP optical emission spectrography. The detection level of lithium by this method is 10 – 10,000 ppm. Complete results are pending. 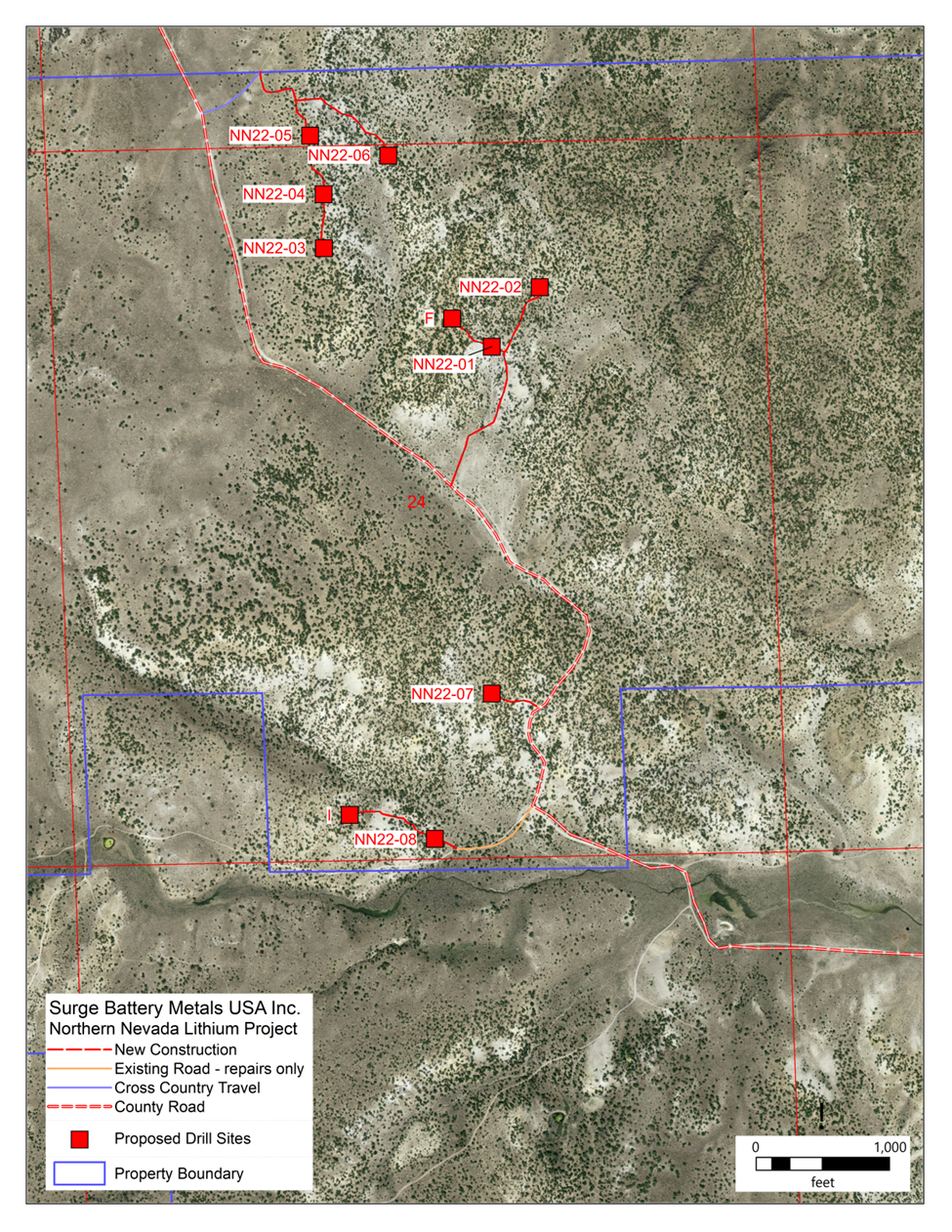 Alan J. Morris of Spring Creek, Nevada, a Qualified Person as defined under Nation Instrument 43-101 has reviewed and approved the technical aspects of this news release.

The Company is a Canadian-based mineral exploration company active in the exploration for nickel-iron alloy and Copper in British Columbia and lithium in Nevada whose primary listing is on the TSX Venture Exchange. The Company’s maintains a focus on exploration for high value battery metals required for the electric vehicle (EV) market.

The Company owns a 100% interest in 95 mineral claims located in Elko County, Nevada. The Nevada North Lithium Project is in the Granite Range southeast of Jackpot, Nevada, about 73 km north-northeast of Wells, Nevada. The target is a Thacker Pass or Clayton Valley type lithium clay deposit in volcanic tuff and tuffaceous sediments of the Jarbidge Rhyolite package. The project area was first identified in public domain stream sediment geochemical data with follow up sediment sampling and geologic reconnaissance returning assay results for lithium ranging from 29.1 ppm to 5,120 ppm. Significant results included 89 samples outlining a highly anomalous zone containing sample points greater than 1,000 ppm lithium. Currently, the zone of highly anomalous lithium values extends about 1,700 meters east-west in two bands each about 300 to 400 meters wide. The anomalous values appear to be in soils developed on airfall or water lain rhyolitic tuff overlain by welded ash flow tuff.

In addition, the Company has a Property Option Agreement to earn an undivided 80% interest in 16 mineral claims, comprising 640 acres located within Nevada’s San Emidio Desert, known as the Galt Property. Recent mineral exploration on the Galt claim group includes 51 playa sediment samples collected for chemical analysis at ALS Geochemistry in Vancouver, B.C. Results of aqua regia leaching of the samples show 68 to 852 parts per million lithium (mean 365 ppm), 5.3 to 201 ppm cesium (mean 72 ppm) and 35 to 377 ppm rubidium (mean 180 ppm). Results from two seven-foot-deep auger holes show lithium, cesium, and rubidium concentrations in the range of 143.5 to 773 ppm Li, 56.8 to 102.5 ppm Cs and 155 to 272 Rb.

The Company has a Property Option Agreement to earn an undivided 80% interest in certain mineral claims from Nickel Rock Resources Inc. The Project (The Surge Nickel Project) consists of two non-contiguous mineral claims groups consisting of 6 mineral claim blocks located in northern British Columbia. One claim in the Mount Sidney Williams area (claim HN4), covers 1863 hectares immediately south of and adjacent to the Decar Project, currently being advanced by FPX Resources, and 5 claims in the Mitchell Range area, northeast of Decar, (N100 Group) covering 8659 hectares. Three of the claims are subject to 2% NSR, including the (HN4 claim and the two southernmost claims of the N100 claim group). Both projects target the nickel-iron alloy mineral “Awaruite”, hosted by serpentinized intrusive rocks of the Trembleur Ultramafic Unit.

On Behalf of the Board of Directors

Neither the TSX Venture Exchange nor its Regulation Services Provider (as that term is defined in the policies of the TSX Venture Exchange) accepts responsibility for the adequacy or accuracy of this release. This news release may contain forwardlooking statements which include, but are not limited to, comments that involve future events and conditions, which are subject to various risks and uncertainties. Except for statements of historical facts, comments that address resource potential, upcoming work programs, geological interpretations, receipt and security of mineral property titles, availability of funds, and others are forwardlooking. Forwardlooking statements are not guaranteeing future performance and actual results may vary materially from those statements. General business conditions are factors that could cause actual results to vary materially from forwardlooking statements.