VANCOUVER, BC / ACCESSWIRE / June 30, 2022 / SNOWLINE GOLD CORP. (CSE:GD)(OTCQB:SNWGF) (the “Company” or “Snowline“) is pleased to announce that it has encountered 415 m of nearly continuous mineralization downhole from bedrock surface in V-22-007 at its Rogue Project’s Valley Zone in Canada’s Yukon Territory. Hole V-22-007 was a 340 m step-out along-strike to the southeast of 2021 drill hole V-21-003 (which intersected 168.65 m averaging 1.25 g/t Au from bedrock surface). A second drill rig mobilized to site and has completed drilling V-22-008, which intersected sheeted quartz veins 460 m from the nearest hole to date, further expanding the footprint of known mineralization at Valley. 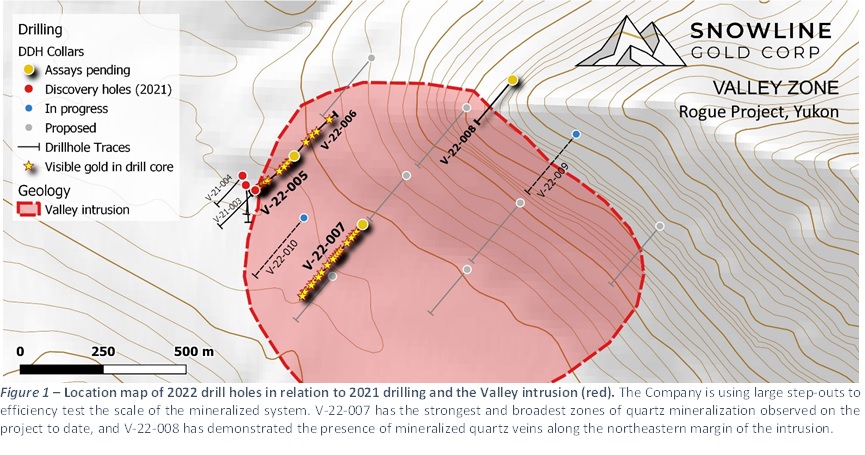 Snowline Chair and Director Craig Hart comments that “I’ve seen a lot of rocks and a lot of drill core from many intrusion-related gold systems, but these Valley intersections have the most intense vein densities I’ve ever seen. There are overprinting vein generations and varying vein orientations which is unusual and further indicates a very robust mineralizing system. To see these vein densities over significant widths is very encouraging. The numerous observations of visible gold and bismuthinite indicate that the system is mineralized, but of course the assay results are required before we get too excited.” Dr. Hart is a globally recognized expert in intrusion-related gold systems. 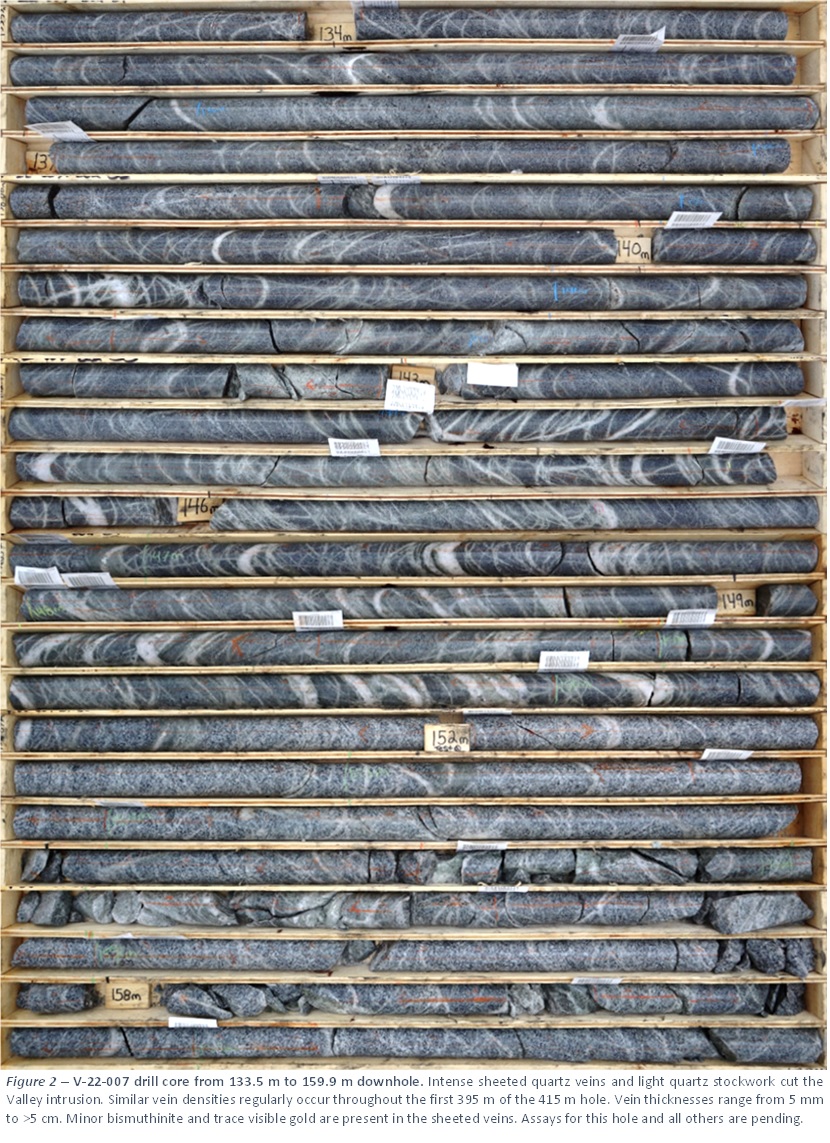 Hole V-22-007 encountered steeply dipping sheeted quartz vein mineralization in diorite from bedrock surface at 4 m to its total depth of 415 m downhole (corresponding to roughly 340 m total vertical depth). The hole encountered the densest concentrations of sheeted quartz veins observed in the Valley Zone to date, in places exceeding 20 quartz veins per metre. Minor bismuthinite is commonly observed in veins. Small (<1 mm) grains of visible gold occur in and along bismuthinite-bearing quartz veins, with 26 instances noted in initial evaluation of the drill core across 369 m, from the first instance at 19 m downhole to the last at 388 m downhole. The final 20 m of the hole (from 395 m to 415 m) were less intensely mineralized, averaging around 5 veins per metre.

The presence of such a large and intense zone of mineralization in a significant step-out along trend highlights the scale potential of the Valley Zone. Assays for this and all holes drilled so far in 2022 remain pending.

Hole V-22-005 was described to 233 m depth in a previous news release (June 13, 2022), based on the progress of drilling at the time. The hole continued to a total depth of 339 m. Some of the hole’s highest vein densities (up to 20 veins per metre) and its thickest quartz veins (up to 30 cm) were encountered below the 233 m mark in subsequent drilling, along with additional occurrences of trace visible gold. 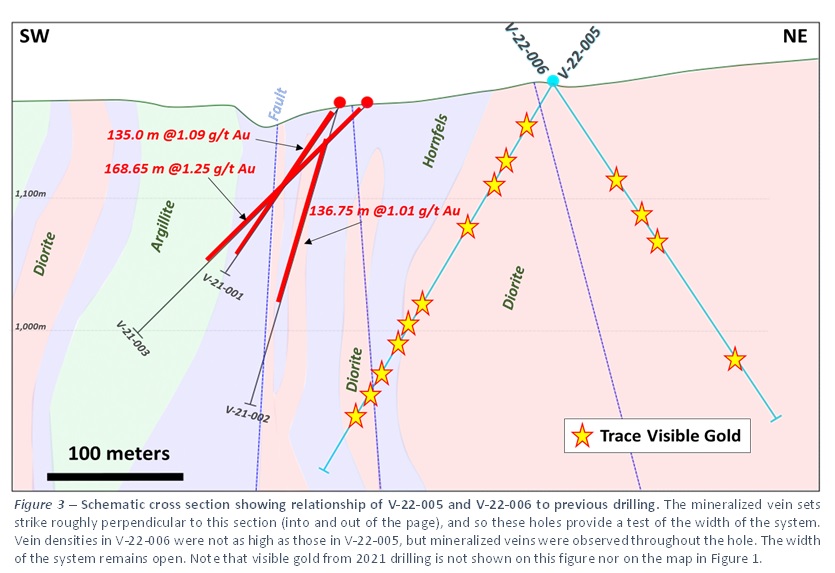 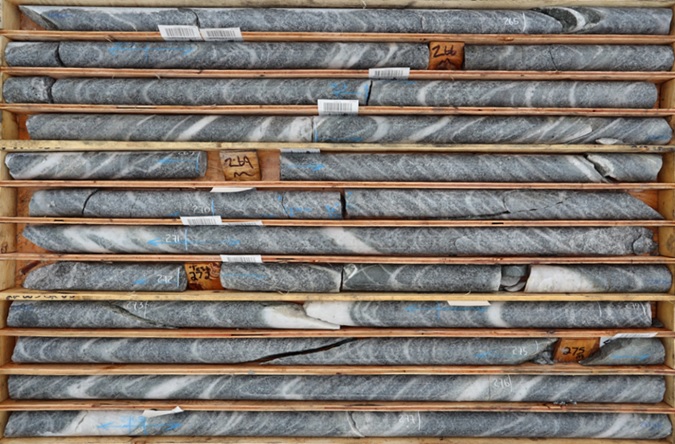 Figure 4 – V-22-005 drill core from 264.3 m to 277.4 m downhole. The most intense zones of quartz mineralization and thickest quartz veins (up to 30 cm true width) in this hole were encountered in drilling following the Company’s June 13 news release. Minor bismuthinite is common in veins, and additional instances of trace visible gold have been observed. Assays for the hole remain pending.TWO DRILLS NOW ACTIVE

A second helicopter-portable drill has mobilized to the Valley Zone. The two drills are working in tandem to rapidly build out the scale of known mineralization at Valley while exploiting efficiencies of shared logistical support.

This second drill has completed drill hole V-22-008, which was collared outside the northern boundary of the intrusion. The hole intersected moderate to strongly hornfelsed sandstones and siltstones locally cut by quartz-arsenopyrite veins known on surface to host gold. From 190.7 m downhole to end of hole at 292 m, V-22-008 encountered sheeted quartz veins in diorite, typically 3-5 veins per metre. The location of this mineralization is over 460 m laterally from mineralization in hole V-22-006 and 500 m along section from the collar of V-22-007, significantly expanding the potential footprint of the mineralized system at Valley.

Assays for all four holes drilled so far in 2022 are pending, and drilling of additional holes at Valley is ongoing. While the Company finds these visual results to be encouraging, it cautions that the significance of the observations reported herein will not be known until assays are received and reviewed. Valley is an early-stage exploration project without a resource estimate, and the presence or absence of an economically viable orebody cannot be determined until significant additional work is completed.

Table 1 – Location and orientations of completed holes thus far in the Valley Zone in 2022. Assays results for all holes remain pending.

The geological setting and style of mineralization at Rogue’s Valley Zone indicate the presence of a bulk tonnage gold target, with similarities to Kinross’s Fort Knox Mine in Alaska and Victoria Gold’s Eagle Mine in the Yukon. An 800 m Phase I drill program conducted at Valley in September 2021 encountered broad zones of gold mineralization in all four holes drilled (see Snowline news release dated February 10, 2022). Gold is associated with bismuthinite and telluride minerals hosted in sheeted quartz vein arrays along the margins of a mid-Cretaceous aged Mayo-series intrusion. 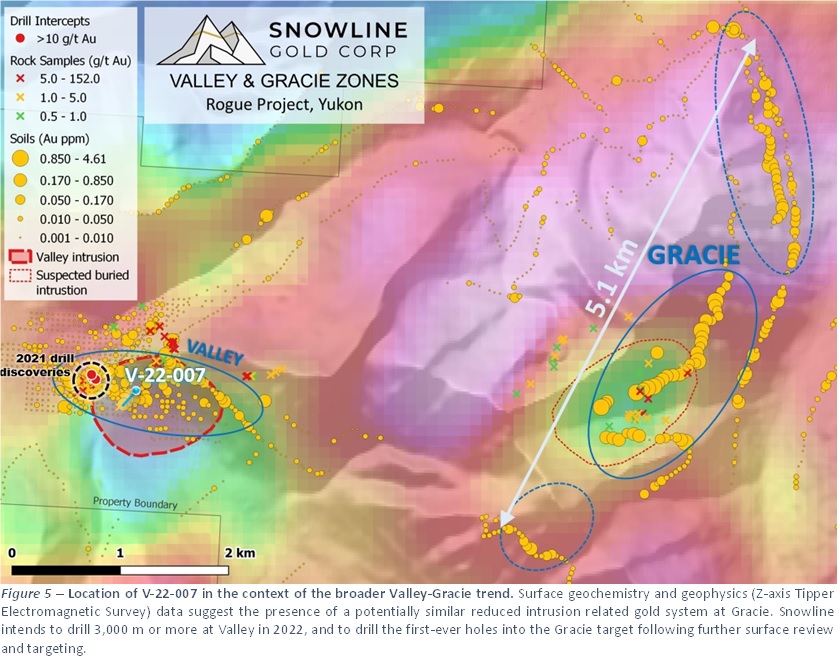 Valley is one of at least five bulk-tonnage gold targets present on Snowline’s Rogue project. The Gracie target, roughly 4 km to the east, covers a 5.1 km x 0.8 km gold in soil and talus fine anomaly above an unexposed felsic intrusion (see Snowline news release dated April 7, 2022). Mineralization is thought to be similar to that at Valley. Following surface work to optimize drill targeting and assuming viable targets are identified, Phase I drilling will commence at Gracie in mid-season 2022. 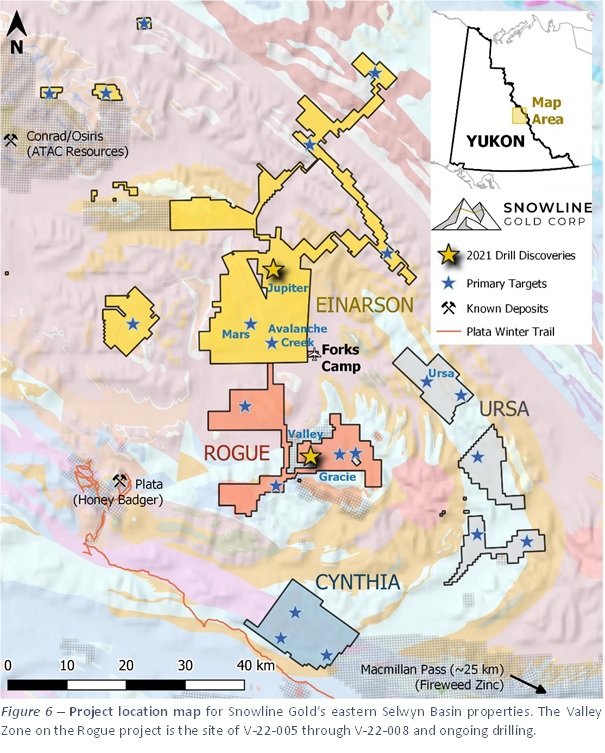 Snowline Gold Corp. is a Yukon Territory focused gold exploration company with a seven-project portfolio covering >127,000 ha. The Company is exploring its flagship >85,000 ha Einarson and Rogue gold projects in the highly prospective yet underexplored Selwyn Basin. Snowline’s project portfolio sits within the prolific Tintina Gold Province, host to multiple million-ounce-plus gold mines and deposits including Kinross’ Fort Knox mine, Newmont’s Coffee deposit, and Victoria Gold’s Eagle Mine. The Company’s first-mover land position and extensive database provide a unique opportunity for investors to be part of multiple discoveries and the creation of a new gold district.

Information in this release has been prepared under supervision of and approved by Thomas K. Branson, M.Sc., P. Geo., Exploration Manager for Snowline and a Qualified Person for the purposes of National Instrument 43-101.

ON BEHALF OF THE BOARD
Scott Berdahl
CEO & Director

This news release contains certain forward-looking statements, including statements about the Company’s upcoming drill program, implied significance of visual inspection of drill core, and surface work and plans for exploring and expanding a new greenfield, district-scale gold system. Wherever possible, words such as “may”, “will”, “should”, “could”, “expect”, “plan”, “intend”, “anticipate”, “believe”, “estimate”, “predict” or “potential” or the negative or other variations of these words, or similar words or phrases, have been used to identify these forward-looking statements. These statements reflect management’s current beliefs and are based on information currently available to management as at the date hereof.